I won’t bore you, since you read about the entirety of this trip yesterday, but I had so many cool pictures, (at least I think so) I wanted to share some more. The pictures don’t do it justice – & its really something you should see for yourself.. If you’re into the great outdoors & exploring.

I actually think I liked this tour better because you really got into the cave, where you had to duck under stalactites and stalagmites.

Stalactites – formations from the ceiling.

Stalagmites – formations from the ground.

Column – when they form together.

Didn’t think you were going to get a science lesson today? Well, with my blog.. you’ll never know. I was wondering the whole time why they called it the crystal palace, because up until this point, all I ever saw were regular old formations.

BUT THESE WERE GLITTERY. & as you well know. I love glitter.

Its not really that glittery in the picture, but just use your imagination a little. It was incredible. This portion of the cave also had a waterfall, but not your typical waterfall. Essentially a hole in the ceiling, and water rapidly falling straight down into another hole to go somewhere down in the 3rd level.

I thought the cave would be wetter actually. There were some slippery spots (pro tip – wear tennis shoes) if you ever decide to take on this exploration. & buy yourself a great camera. As wonderful as the iPhone 6 is, I know I could do better. (but you get the idea, right?)

Sometimes the stalactites would grow in rows, which I thought was amazing – but in an easy explanation, its water dripping from cracks in the cave, BUT ISN’T IT SO MUCH COOLER THEN THAT? In this image you can see the cement path that was throughout the cave. Congrats if you’re still reading & excited, because I saved the best for last.

The mirror lakes. The guide asked us to guess how far we were looking down, & its seriously and optical illusion, because I thought I was looking into a deep crevasse of the cave, & this whole time I was wondering how there wasn’t a fence for crazy tourists that get too close. WELL. because I was actually looking into WATER. & a reflection. I felt like an idiot. The water is anywhere from (go ahead and throw in a guess) 3-6 INCHES. I think I laughed out loud. So, if the tourists do get too close, they’ll just get wet. BUT SERIOUSLY.

Looking in the picture, you’re like – yeah duh. its a minor. But when you’re actually THERE. Its DIFFERENT. You can’t tell me this image below doesn’t look like he’s standing on the edge of a deep cavern. Right? Anyway. In person, it was totally wild.

Thanks for going on this trip with me. Love hard, travel often. Where have you traveled recently? Any plans to travel? Let me know! 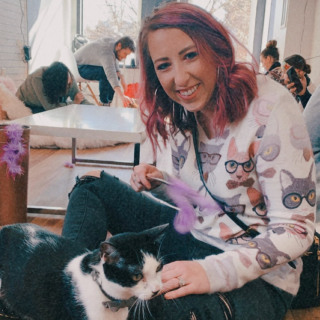